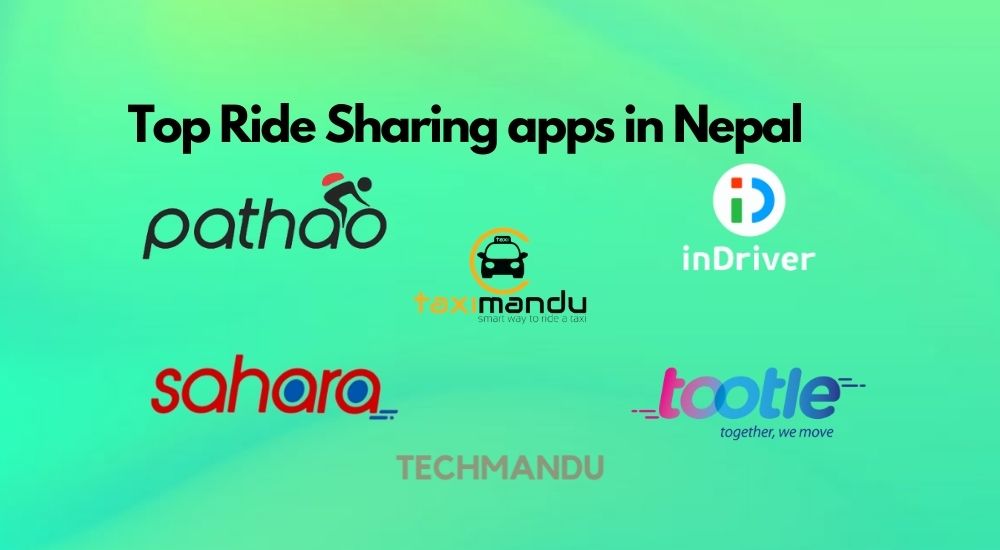 The first on our list is Pathao, the well-known app among Nepalese. Pathao started its journey in Nepal in 2018 against the likes of Tootle which came a year ago Pathao. With the rising number of ride-sharing app users, Pathao got popular within a year. The typical naming is also one of the helpful parts of being popular among Nepalese people.

Pathao offers bike, cab, and food delivery services now. Initially, it started with motorbike services only. The company commenced its bike services on 24 September 2018, car services on 9 August 2019. Also, it started delivering food on 2 October 2020. The company also provides insurance for riders & users. Also, the App layout is polished and easy to use. With the time being, people have gained trust & it has arguably become the number one ride-sharing platform in Nepal.

The second on our list is Tootle, the app which ignited the concept of Ride-sharing in Nepal. Also, Tootle is a Nepalese start-up company that was established in 2017. Expensive taxis in Kathmandu got their worthy competitor when people started booking rides on their smartphones via Tootle. The app got popular within some months. Of course, it was a unique medium of transport to get to the destinations faster than on public buses & expensive taxis.

Tootle also initially started with bike services and later added taxi services. Also, it is a bit cheaper than Pathao. It also has its wallet for digital transactions where you can load money via eSewa or Khalti. The app performance is halted with crashes while canceling a ride. Besides that, there are no significant problems.

Also Read:- Pathao Vs Tootle, Which Ride-Sharing Platform is Better?

Sahara comes at third on our list. This Ride-sharing app was released in Dec 2019 on Playstore. Sahara is also a Nepali startup company providing bike, taxi & food delivery services like Pathao. Sahara has also recently announced its insurance policy for both riders and users (passengers). Also from January 2022, the riders are given 100% of what the users pay for the right. The 0% commission rate is commendable for the riders.

Sahara also features its e-wallet known as ‘Sahara Wallet’ for cashless transactions. The app layout is also impressive with a white and orange-red accent. There are also the options of promo codes and referral codes for in-app rewards which can be used for the ride. Sahara Prime, a premium membership feature is coming soon.

The fourth on the list is inDriver. It was founded in Yakutsk, Russia, the coldest place on earth. This app recently made its way into the Nepalese market. Coming with a unique feature, the app lets you put your price fare for your destination. In other words, you can bargain for the best fare which is quite handy for the users. The recommended fare is provided as per the app’s calculation from which you can deduct the fare.

The app user interface is plain and simple to use. As an international app, it also boasts intercity rides for the users to travel from one city to another. Here, you can choose your destination and book as per your traveling date. Also, you can set the offered fare. It can be cheaper than bus & regular taxis.

Last but not least is Taximandu. Just as the name implies, Taximandu is all about cabs (taxis). Introduced in 2019, it saw the potential of a regularized taxi booking service for both taxi drivers and passengers. There are two options in the app; booking a ride and renting a cab. So basically, you also rent a cab for your required day of travel and period.

Taximandu also has a wallet that can be loaded via eSewa. Digital transactions are increasing day by day, thanks to ride-sharing apps as well. The app’s logo also indicates that it will also soon provide food delivery services as well. This taxi-focused app has also lured local taxi drivers for a well-managed service.

Besides the aforementioned apps, there are other apps in the market too such as, Metro online Taxi, Sarathi, Pokhara Taxi (Pokhara Specific) to name a few. There used to be Eddy Cab too which is no longer available now.

The ride-sharing platform is seemingly being better and better with competition in the market. The rise in Digital Payments has also aided a lot for easy payments. Also, traveling on a crowded bus in Covid situations is also making people opt for easy ride-booking apps with reasonable pricing. Bike services are faster and save time in case of urgent travel. Even though it is not that safe, the insurance coverage provided by Pathao & Sahara does help people. This has also guided a way for other companies to follow. Furthermore, the government needs to form a rule regarding mandatory insurance by all ride-sharing companies for both riders and users.

So what do you think of Ride-sharing platforms in Nepal? Are you satisfied with their services? Do you often use such apps for traveling? Do write us your thoughts below in the comment section.

Having covered the digital news of Nepal, we recommend you use online shopping with prepayment. Encourage More Digital Proliferation & Buy from here to support us.
Share
Facebook
Twitter
Pinterest
WhatsApp
Previous articleSahara Providing Insurance For Riders and Users
Next articleeSewa Secured Fund Transfer Launched, Learn How To Do It
RELATED ARTICLES
Apps

Now You Can Use IME Pay in Nepali Language, Learn How to